This page is an addition to our Wireless networks page. You will not be assessed on this material, but in order to deepen your understanding you might want to read this page.

Network information about your computer[edit]

Alt-click on your wireless network icon to learn more about your network. 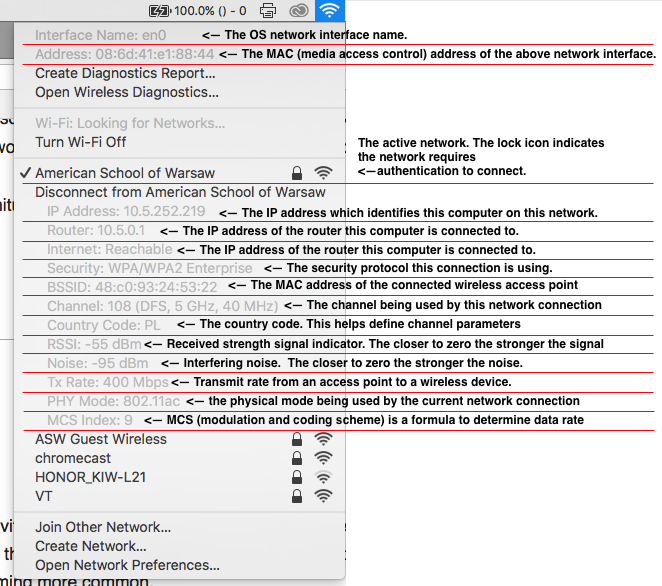 Software components of a wireless network[edit]

In computing, a device driver is a computer program that operates or controls a particular type of device that is attached to a computer. A driver provides a software interface to hardware devices, enabling operating systems and other computer programs to access hardware functions without needing to know precise details about the hardware being used.[3]

In computing, firmware is a specific class of computer software that provides the low-level control for the device's specific hardware. Firmware can either provide a standardized operating environment for the device's more complex software (allowing more hardware-independence), or, for less complex devices, act as the device's complete operating system, performing all control, monitoring and data manipulation functions. Typical examples of devices containing firmware are embedded systems, consumer appliances, computers, computer peripherals, and others. Almost all electronic devices beyond the simplest contain some firmware.[4]

The 802.11 workgroup has documented use in five distinct frequency ranges: 2.4 GHz, 3.6 GHz, 4.9 GHz, 5 GHz, and 5.9 GHz bands. Each range is divided into a multitude of channels. Countries apply their own regulations to the allowable channels, allowed users and maximum power levels within these frequency ranges.[5]

A channel has a certain capacity for transmitting information, often measured by its bandwidth in Hz or its data rate in bits per second.[6]. Each wireless radio operates on a configured radio frequency (RF) channel identified by numbers. A radio assigned to a particular channel both transmits and receives all traffic on that channel. Depending upon the network configuration, some channels might have less interference than others. Choosing the right channel lets you optimize performance.[7]

The wireless transmit rate is the speed that data is being transmitted from an AP to a wireless device. The technical term for this is the TxRate. For 802.11n connections, the maximum possible rate is 300 Mbit/sec (using 40 mHz and channel bonding).[11]